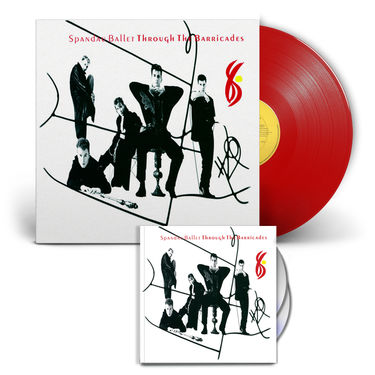 This CD & DVD package features a newly remastered version of the album as well as extended remixes including the never before released in the UK 12” of ‘Cross The Line’ and a previously unreleased version of ‘Fight The Heartache’.
The DVD presents a feature length documentary especially made for this release including promo clips from the album as well as a wealth of rare, unseen and newly recorded footage and previously unseen home movies and live footage including a very special one off performance of the David Bowie/Mott The Hooplesong ‘All The Young Dudes’ in front of 100,000 fans in Casa De Campo in Madrid after receiving the keys to the city.

Following on in the vein of Spandau’s critically acclaimed documentary ‘SoulboysOf The Western World’, ‘Through The Barricades: Remastered / Revisited’ tells the story of the album from the new material’s first outing at Live Aid to rehearsing in Ireland and becoming firm friends with Def Leppard (which led to Gary Kemp and Steve Norman singing uncredited backing vocals on their Hysteria album) and through to the band recording in France and Germany before undertaking a yearlong tour in support of the album.

The album has been fully remastered with the band and original producer Gary Langan, who has worked with the likes of Queen, The Art Of Noise, Seal, Yes, Billy Idol, ABC and many more.

This beautiful deluxe package is rounded out by liner notes by Daryl Easlea featuring contemporary interviews with band members, previously unseen photographs and outtakes from the album photo shoot, which were taken by the world-renowned photographer Nick Knight.

DVD Plays in all zones