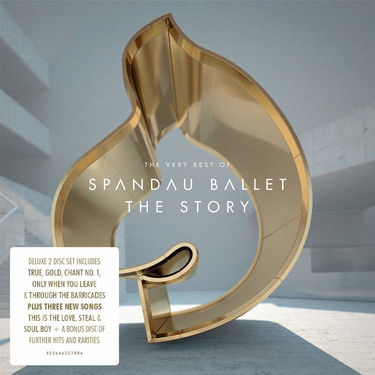 The Story - The Very Best Of Spandau Ballet (Deluxe Edition)

The Story (The Very Best of) is just that, it’s the musical story of the band from their first single 'To Cut A Long Story Short' through their numerous top 10’s including 'Only When You leave', 'Through the Barricades' and 'Gold' via their global number 1 True, the album come right up to date by including three brand new Trevor Horn produced tracks including the single 'THIS IS THE LOVE'.

This limited edition 2 disc deluxe version for the album comes with an expanded booklet in digi-pack format which features a hit packed disc 1 along with three new Trevor Horn produced tracks and a second bonus disc that including some singles that didn’t make disc one such as Paint Me Down, 'She Loved Like Diamond' and 'Be Free With Your Love' as well as some fan favourites that also feature in the band film documentary 'Soul Boys Of The Western World'.